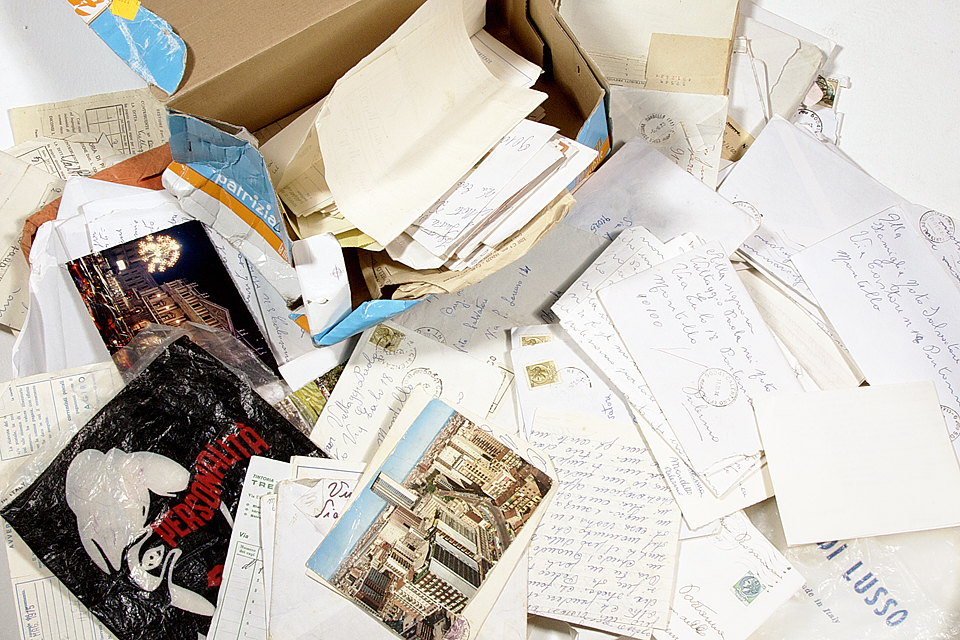 For the fifth exhibition in CRATE's Bad Translation programme, Lucy Harrison explores interpretation and coincidence through the stories of two people – one from 20th Century Italy, the other from 19th Century Margate.

In the first part of the show, which takes place in CRATE’s Project Space 1, she attempts to piece together the biography of the owner of a collection of letters and postcards found on a roadside in Sicily.

The London-based artist was visiting Palermo last year when she discovered a carrier bag full of correspondence spanning 20 years. She returned home with the letters, intrigued by what they might reveal of their owner – and what they might withhold. With the help of an Italian speaking friend, she found parallels between the found collection and other ephemera belonging to absent family members which she herself owns. Following this, she asked various Italian speakers in Italy and the UK, including in Margate, to translate more of the letters into English, and also to interpret and speculate on what the letters might have meant and what they reveal about the correspondents’ lives and relationships. Her search for Italian connections in the area led her to a local story that casts a different light on what happens to somebody’s possessions when they die.

In Project Space 2, Harrison investigates a pamphlet found in the Margate Local History Archive. ‘A Plain Statement of a Late Base Conspiracy’ is the confusing story of a man in Margate in 1837 who felt persecuted by gossip in the town about why his uncle cut him out of his will. The gossip was literally spread around the streets by graffiti and ‘printed placards’.

The Absent Collector is Harrison’s investigation into the process by which the belongings of one who is no longer there have new value judgments placed on them and are often disseminated to various locations and read without the previous owner’s knowledge of why they were kept, or of the specific relationships between the objects that determined their meaning. By focusing on the idea of an unknown collector, the project considers how others may find or interpret items that were given away, and the way in which those that were kept now signify a void; the writer or receiver of letters no longer being present to clarify points or retell stories.

Harrison’s dissemination of the Sicilian collection is in part an attempt to explore how personal connections and family histories make objects meaningful: that when her collaborators’ input is gathered to form a new collection, it might create a portrait of the vacuum that is created when someone dies. The exhibition also examines the act of ‘reading’ a collection of objects – whether they be letters, objects, photographs - highlighting the role of guesswork in the absence of the original collector, and the extent to which one’s understanding of collections is guided by one’s own desires rather than curatorial or objective agendas. Furthermore, it considers the impact that this act of reinterpretation can have in the real world.

The Absent Collector is part of Bad Translation, CRATE’s programme for 2009/10. It is generously supported by Arts Council England and Kent County Council.

Lucy Harrison is based in London and graduated from the Royal College of Art in 1999. Her recent work investigates the subjective nature of the experience of place and connections between memory, location and architecture. It takes the form of photographs, book works, video and various forms of printed and published material. Her projects often engage with the public realm through collaboration, encounter and exchange, and involve residents of a place in the work, such as Canvey Guides, a project on Canvey Island in 2007, for which she formed the Rendezvous Walking Club and worked with people on the island to produce an alternative guidebook and audio guide. Recent projects include Fourteen Interventions (2010) at Swedenborg House, Poetry Machines (2009) at the Saison Poetry Library, London, The Stratford Grapevine (2008) for Art on the Underground at Stratford station and a residency at Lokaal 01, Antwerp in 2008. She was artist in residence at the Institute for Contemporary Interdisciplinary Arts at the University of Bath last year, and is developing a new project for SPACE working with residents of an estate in Hackney Wick, London.

Lucy Harrison is Senior Lecturer in Fine Art at University for the Creative Arts, Canterbury.